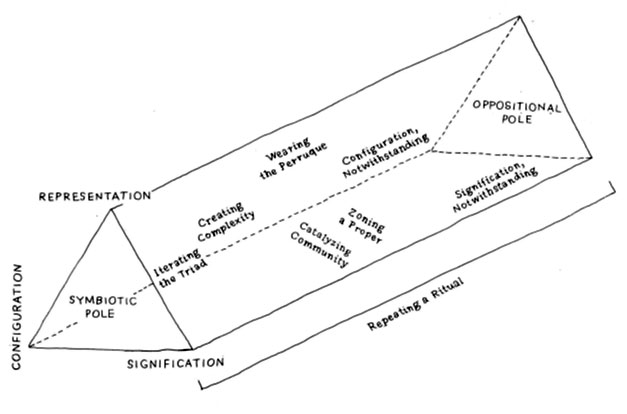 On Januari 29th, in the middle of a Covid-lockdown, Louis Volont (Department of Sociology & Culture Commons Quest Office, University of Antwerp) defended his doctoral thesis ‘Shapeshifting: The Cultural Production of Common Space’. City in the Making in general, and Pension Almonde specifically, was one of the three main cases Louis used as ‘witnesses for the defense’. The other two being The Public Land Grab (London) and  Montana Verde (Antwerp). The full thesis can be read online, but here is a foretaste.

In his introduction Louis states his basic ‘empirical’ research question thus: “This enquiry puts the concept of common space to the test. My guiding question, is this one: how is common space’ produced within the current conditions of urban development? Put differently: through which tactics do urban activists give a spatial expression to the concept of the commons?”

The study main ‘guide’ is Lefebvre’s ‘triad’ (from ‘The Production of Space’ and ‘Critique of Everyday Life’); ‘lived’ space (representational space), conceived space (representations of space), and perceived space (spatial practice). But Louis renames/redefines this Lefebvrean triad because of: “Lefebvre’s ‘woolly’ formulation of the triad’s three spheres. Representations of space as well as spaces of representation seem to figure in the triad as things, namely as visual, verbal or written projections in the context of the former, and as spaces endowed with a sense of multiple meaning in the context of the latter. Spatial practice, then, emerges not as a ‘thing’, but as a ‘process’: a process of putting space to use, be it for survival, societal reproduction or capitalist growth.”
Instead, the triad is reformulated as “the expressions of representation (formerly known as representations of space), configuration (formerly known as spatial practice), and signification (formerly known as spaces of representation): altogether the three ‘force fields’ of the triad. These three force fields leave behind any distinction between ‘thing and process’ but imply merely ‘a mode of doing’.
This is a linguistic, pragmatic operation in order to be able to point, without much confusion, to each of the three elements under consideration. Hence: within the field of representation, I ask: how do commoners ‘think’ common space? Within the field of configuration, I ask: how do commoners ‘build’ common space? And in the field of signification, I ask: how do commoners ‘live’ common space?”