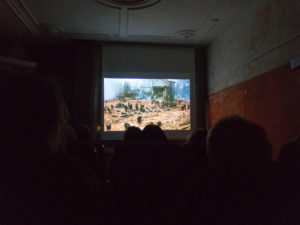 We can become “unstuck in time,” and so it goes. Was it a coincidence that the evening reserved for movie night at Stad in de Maak during “Proof Aliens Exist” week in Rotterdam happened to be February the 13th, the anniversary day of the Dresden bombing, 72 years ago? Slaughterhouse Five, the 1972 film directed by George Roy Hill, winner of the Cannes Jury Prize of the same year was selected among many other excellent alien themed films for the 9:00 pm screening. Based on the book by Kurt Vonnegut,  the story is a partially autobiographical story that weaves in and out of Dresden, in the days leading up to the city’s catastrophic aerial firebombing. The main character, Billy Pilgrim, survives the city’s destruction and returns –again and again– to different episodes  in his otherwise bland life.  Like Voltaire’s Candide,  Billy Pilgrim’s experiences unfold as random chances but entirely out of sequence: flashbacks with no present.

One of the many in the story’s disjunctures takes place in the alien planet Tralfamadore. where the native aliens live in 4 dimensions, allowing them to stream through space in time circuitously much like Billy Pilgrim.  Simple shaped creatures resembling “plumber’s friends,” they build  a surreal glass geodesic dome, a sort of humanly comfortable zoo, where Billy Pilgrim can be observed. The extremely hostile atmosphere on the planet keeps him confined to the interior of the dome, but he eventually gets a female companion with whom he can mate. And so it goes.

Rotterdam is a sister city of Dresden, and survived its own disastrous aerial strike. The path of destruction in Rotterdam is marked by a series of flat sidewalk lights, glowing red. We as the audience stepped back and forth into these different realities, in effect becoming transported into this kind of timeless condition, where past, present and future loses their familiar structures. The public at the film screening came unstuck in time, becoming like Billy Pilgrim, becoming like the aliens from the planet Tralfamadore. This is what becoming alien means, going outside into a world where everything is chance, everything fits together in the end, and everything is truly wonderful. “Enjoy life’s good parts and forget the bad…”

PS: Also read the special report Proof Aliens Exist in Rotterdam that was made by Peter T Lang during the week.