The last Fridays of September and October the ground floors of Pieter de Raadtstraat 35-37 hosted the breakfast meetings of CreativeMornings Rotterdam. We were just a node in an international network of breakfast plus lecture meetings for creatives that take place at the same time in cities all over the world.

The first meeting on Friday 25 September was themed Empathy. After a glorious Chinese breakfast prepared by Ni Nan and Roy (on mirror tables reused from an intervention by Petra Blaise in Huis Zonneveld), the lecture by Sam Nemeth and Ideas (nickname of Syrian refugee Mohamed) really touched a nerve (and our hearts). Especially because of the influx of refugees in Europe and the growing controversy about this in our country.

Sam and Ideas talked about their meeting on Lesbos where Ideas had landed after deserting from the Syrian army and living for a while at his grandma’s place before taking the Turkey Route to Europe. From the moment they met they stared a social media conversation which was published on the website Ideas Odyssey.
Ideas is now safe in the Netherlands with a permit to stay. After the lecture Sam mentioned that Ideas/Mohamed was still looking for a house. We are happy to announce that now a month later he is going to live in one of our houses.

After this empathic Friday with a nice ending, next meeting on Friday 30 October was a sort of a Shock. Well that was that month’s theme, so we were warned. After another beautiful breakfast (with a shocking culinary ending) by Ni Nan accompanied by an acoustic set by Princeton, director Tom Six talked about his trilogy The Human Centipede, the most controversial of all schock-horror movies. For those who are not acquainted with his work, let’s just say that it’s all about connecting people. Tom was very open about his goals and ambitions, basically to become famous by doing something shocking and controversial. And it must be said he accomplished this goal fully and went to the limit to achieve it. Most of the audience seemed to take it by their strides (some left) and the discussion afterwards was ehh … lively.


Some video with an impression of the things going on last Friday, featuring Princeton

Thanks to the people of CreativeMornings Rotterdam (and Guido who invited them). It was a joy to have you all and good luck at the next place. 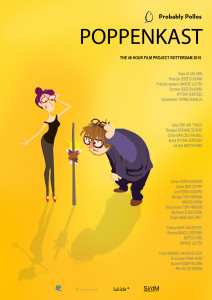