So, to keep the price of living affordable, there is much to say to take the land out of the economic equation. One way to do this is dissociating land from the real-estate on top of it. In some countries, such instruments have deep roots. In the Netherlands, many cities hold the urban land in possession and make it available through ‘erfpacht’ (land lease contracts) with a long runtime, say 99 years. However, under pressure from a withering pool of public assets and the temptation of a quick cash-grab, such constructions are in decline. And in many other countries, they have never existed.

This is why Community Land Trusts (CLT’s) have come into the picture. A CLT does precisely this ‘dissociation’ of land and all the real-estate on top (and thus diminishes the impact of land on the price of access to real-estate). But it does something more: it binds a community. And this last is mostly done in a quite interesting way, by bringing the governance over the land not just to the community of inhabitants that resides on the land, but it also gives – in an equal manner – that governance to the broader neighbourhood and of the public authority. Generally, they share their say in the CLT with each 1/3 vote (1/3 owner of the land or trust, 1/3 owner or user of real estate and 1/3 community – mostly inhabitants of the surrounding area). This means that a CLT is much more than a trust on land – it is a trust on the wellbeing of a community.

CLT’s have developed in the US and the UK, and in recent years have started to become of interest in mainland Europe. The CLT Brussels (CLTB) has had a pioneering role in this, anchoring it in the Belgium legislation. City in the Making has held a keen eye on this, and over the last few years, we have had a frequent exchange with the motivated, inspiring and very welcoming group behind it. And luckily also elsewhere, it is being taken up. 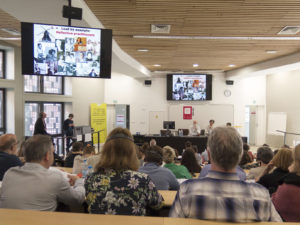 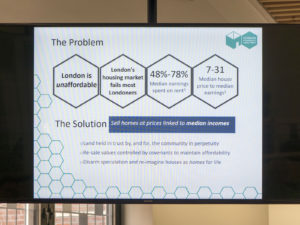 Hence, we have become involved in a North-West Europe-wide network aiming to make CLT constructions a next normal thing throughout Europe. This has brought us to the first meeting of this network (22nd of May 2018, in Lille). An intriguing mix of activists, legal experts and ‘citizens’, taking up part of this challenge for the two years to come. Above all, it has made us even more aware that the issue of urban land and its commodity value is one to be tackled. Time for a co-operative land-bank?