From the beginning Stad in de Maak has been inspired by the German Mietshäuser Syndikat. This organisation, grounded in the German squatter movement of the 1980’s, at present consists of about 120 different autonomous co-housing (and mixed use -working and -cultural) projects. Each of the projects is self-organized and largely autonomous in its day to day decision making. The buildings are collectively self-managed and owned by the people living there. They pay rent to their own coop. The rents are kept low, and not having any money is never reason for not being admitted.

The ‘umbrella’ organisation Mietshauser Syndikat has a share in all the individual projects and can veto major systemic decisions, most notably the sale of the property. Because of this structure, the projects are in effect taken off the (speculative) market. Besides that, the Syndikat offers know-how to new co-housing projects. Know-how that was gathered over time in the more than 100 self-built and managed projects. Since the older projects have paid off their loans, but keep on paying rent, the Syndikat, or the individual members, can now also offer financial aid in starting new projects.
Thus the principles of self-organisation and management, of solidarity and of non-speculative, affordable housing for all have been firmly embedded in all the groups that together make up de Syndicat.

For a couple of years several groups in the Netherlands have talked about starting our own Syndicat. This has been achieved this year by starting de vereniging (union) VrijCoop. Stad in de Maak is one of the founding members. A direct copy of the German model proved not possible because of different legal systems. But we managed to stay very close to our inspiration. Several projects are about to start, EcoVillage Boekel probably being the first.
At Stad in de Maak we have been trying several times to bid on derelict buildings in order to escape the temporality of our current houses. Having been severely outbid by the ‘market’ on these occasions, we still have good hope that we will succeed soon.

See all about the Mietshauser Syndicat in this one hour movie ‘Das ist unser Haus’ (This is our House, German spoken, but subtitled in English or Nederlands, choose the CC button (chosen caption) in the Vimeo menu)
http://das-ist-unser-haus.de/

More on the Syndicat:
https://www.syndikat.org/en/ 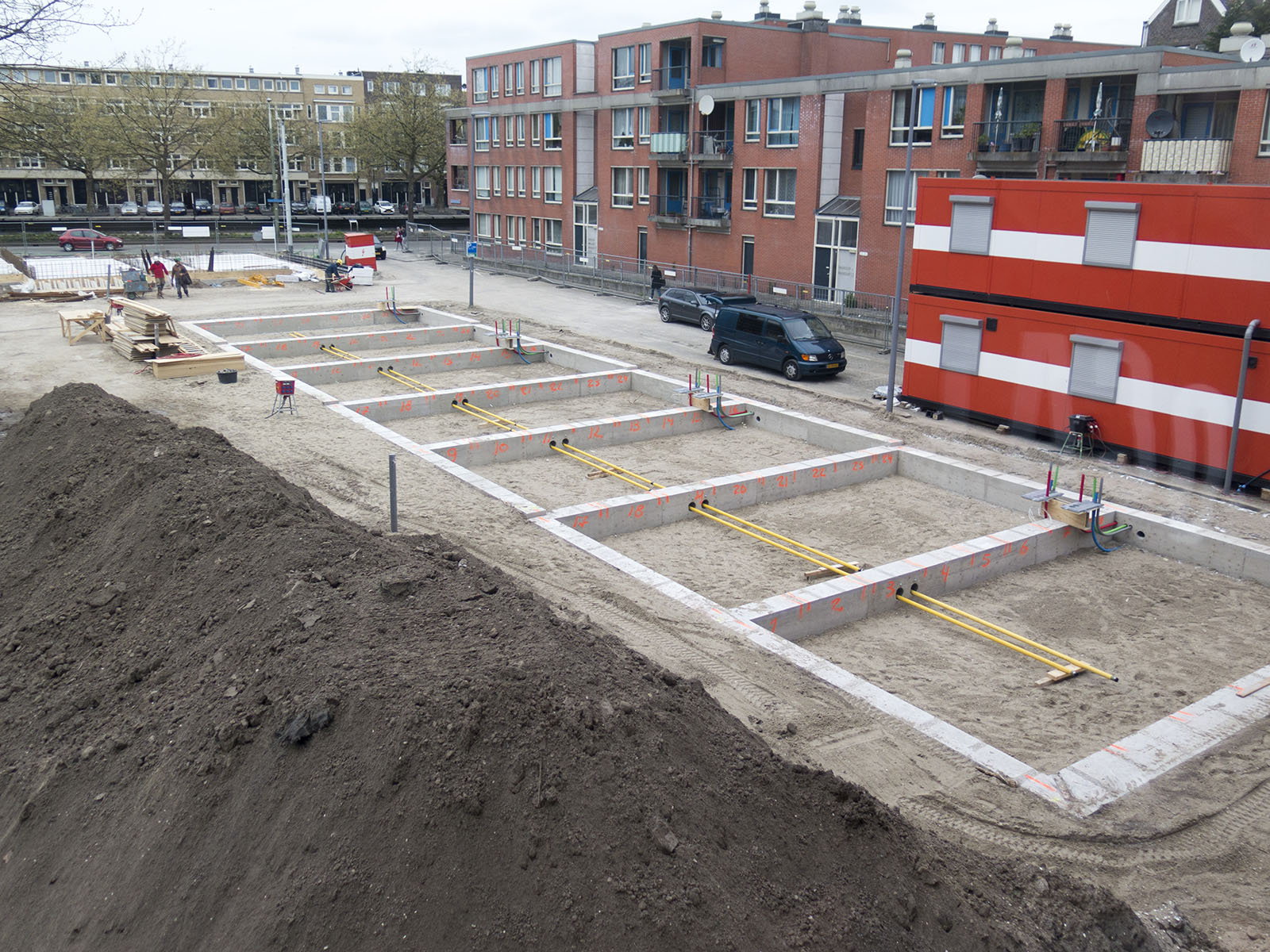 So, to keep the price of living affordable, there is much to say to take the land out of the economic equation. END_OF_DOCUMENT_TOKEN_TO_BE_REPLACED

Bakkerij De Eenvoud (‘Bakery Simplicity’ or ‘Common Bakery’), a neighbourhood bakery that is being built in the commons spaces of City in the Making, participates in De Burger Bepaald (The Citizen Decides). Inhabitants of Rotterdam Noord may divide 50.000 Euro’s among 65 local cultural initiatives, by online voting. 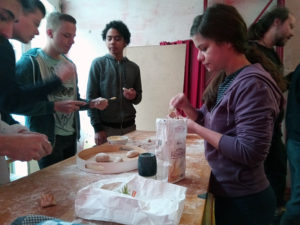 Bakkerij De Eenvoud will build a lime oven in De Stokerij commons, and together with neighbours and other bread enthusiasts bread will be made and stories and recipes will be exchanged. Learn to make your own bread from your neighbours and taste the warm bread we make for each other.
Last Wednesday 22nd the Bakery was kick-started. The first bread was baked and tasted. Together with City in the Making inhabitants and neighbours a special one-on-one model was made from dough and paper to test different positions of the oven within in the commons space at Pieter de Raadtstraat 35. Additional knowledge and flour was provided by windmill De Walvis in Schiedam.

END_OF_DOCUMENT_TOKEN_TO_BE_REPLACED Nice, City in the Making is one of the 10 projects out of 44 entries nominated by the jury for the Rotterdam Architecture Prize 2017.
Our pitch: “Architecture is more than just stacking bricks neatly or the supple ordering of function and space. Architecture at its best generates a sparkling urban life and facilitates the free blossoming of human endeavours. It is the art of enabling (Cedric Price)”

Even nicer: everybody can vote for the public’s prize!

And klick on the button: ‘Ik stem op dit project’ (I vote for this project). Fill in your email, confirm you are not a robot (unless you are a robot, in that case: sorry, not for you) and click ‘Stem’ (Vote).
Of course, you may choose to vote for another project. But why would you?

Tuesday 24th October City in the Making celebrated the future. A gathering of about 40 inner circle City in the Making inhabitants and fellow-workers plus friends attended three presentations of projects that were made as a contribution to the yearlong festival Pioniersmeent De Stokerij (which loosely translates as: Pioneer Commons The Stokerij or Boilerhouse). 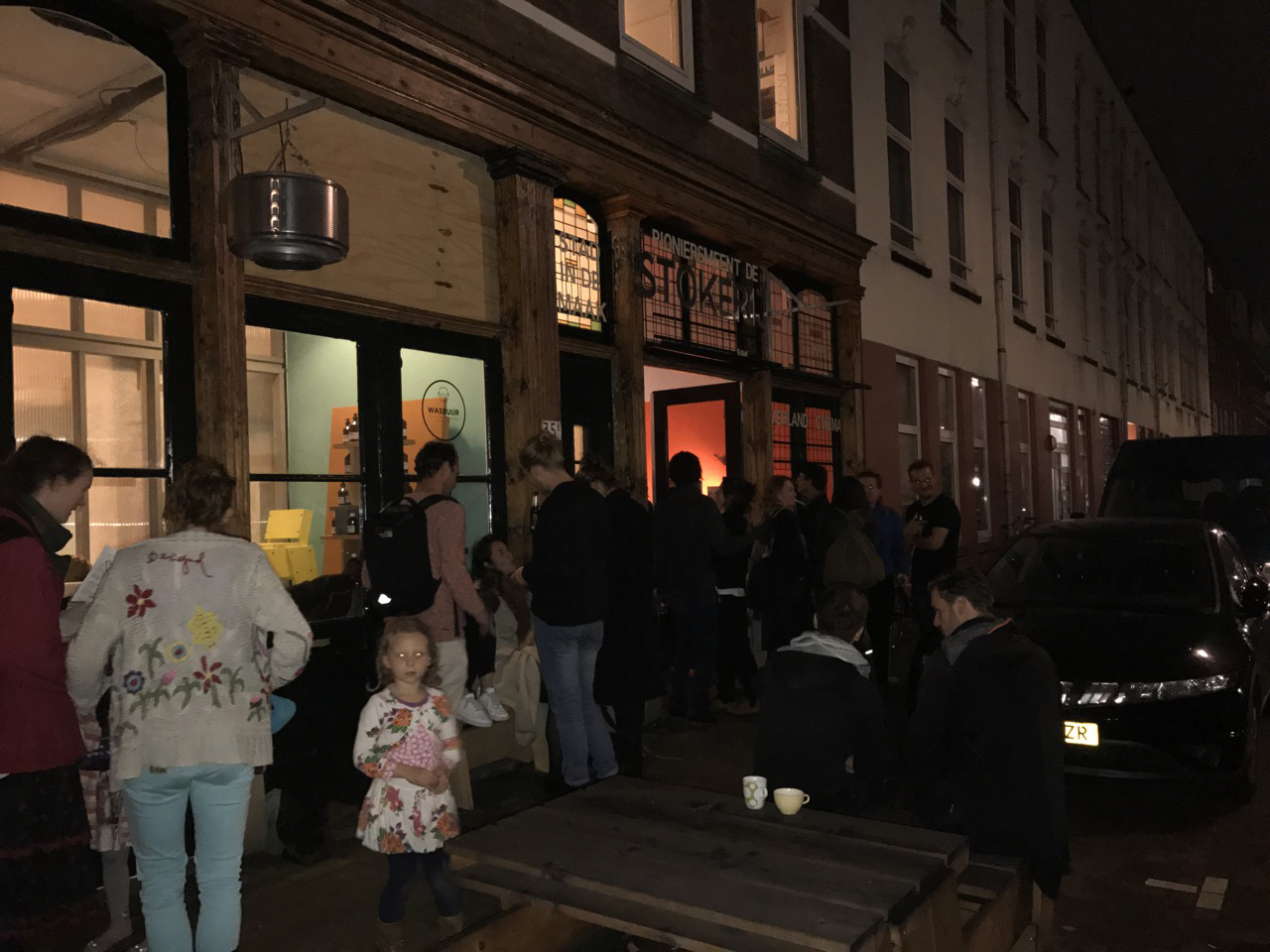 Architect/cartographer/draughtswoman Carlijn Kingma, and futurologist Edwin Gardner and Christiaan Fruneaux (both from Monnik, Studio for Futures & Fictions) were asked to reflect upon the near and distant future, both of society in general as well as of City in the Making as a network and Rotterdam Noord as our place of action. Our secret hope was that they would sketch us a clearly defined roadmap to our future. As usual with such questions we got more than we asked for, but also in a way we got less.
END_OF_DOCUMENT_TOKEN_TO_BE_REPLACED Since november architect/artist/cartographer Carlijn Kingma has been working on a supersize pen-and-ink drawing that positions City in the Making in the larger field of modernity and New Romanticism. Finally it is finished.  The drawing, titled: The Babylonian Tower of Modernity’, is on show at Carlijn’s first solo-exhibition in Rotterdam.
We invited everybody, but especially experts and fans of Utopia’s and Ideal Cities, to join us in the celebrations next Sunday. 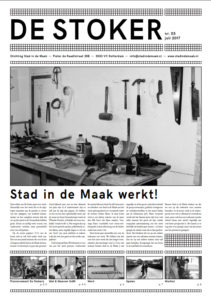 This issue is dedicated to the topic of work, the work we did in and around the common spaces and the projects we worked on collectively, but also to the use of work and of a universal basic income.

On Thursday 13 July, City in the Making is hosting participants of ‘Practicing the commons: IASC 2017 Biennial Conference‘ organised by Institute for Collective Action, Utrecht.

The conference focuses on self-governance, cooperation, and institutional change through examples from all over the world, but also pays much attention on the significant current-day developments on common-pool resources and cooperatives within the Netherlands (such as knowledge commons, energy cooperatives, care cooperatives, urban commons, and other citizens’ initiatives), not only by inviting representatives of those Dutch initiatives to join as conference participants, but also by offering them an opportunity to draw attention to their initiatives, by organizing public events and field-trips.

The excursion we will witness recent developments in urban commons taking place in the city of Rotterdam – dealing with housing, food, and education. City in the Making is hosting it together with Food Garden (De Voedseltuin), a charitable organization that distributes food to low-income individuals to avoid hunger and Rotterdam Skillcity (Vakmanstad), a knowledge common, where primary school children are taught gardening, cooking, aikido or judo, technology and programming, and philosophy on a weekly basis.

More about ‘Practicing the Commons’: https://www.iasc2017.org.

The  program (modified): The expert tracker Piet Vollaard determined the  path along a  straight line  from the Rotterdam Zoo Observation Tower (destroyed) to the Alien Crash Site at the edge of Kralingse Plas (In an “alternative world” the Prinsenland site is allegedly  a sculpture created by the artist Frans de Wit to mark the lowest point under sea level in the Netherlands. However, there are those who firmly believe this art work was part of a massive coverup perpetrated between 1992 and 1996 on the Rotterdam people. Instead it is far more likely the “true” story is that the Kralingse concrete sunken disk  is actually an alien crash site astutely disguised at the time using this artistic pretext *). END_OF_DOCUMENT_TOKEN_TO_BE_REPLACED